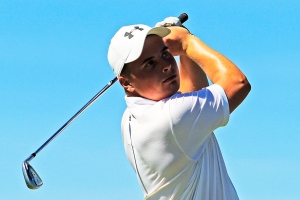 Mallow’s James Sugrue has an opportunity to qualify for the British Open in Carnoustie, he booked his place in final qualifying for the British Open today when he shot an eight under par 64 in Baltray to lead the regional qualifying event.  Sugrue started with two birdies and he as four under at the turn.  Not content with that he birdied 11, 12 and 16, and he closed with another birdie on the par five 18th in a flawless round.  With fellow Mallow Senior Cup golfer Conor Dowling on the bag with him, Sugrue beat the field by four shots to claim the first of seven final qualifying spots available.  It was a consolation of sorts for Sugrue, he narrowly missed on selection for the Irish team to compete in the European Championships in two weeks’ time.  In any case, he’ll now be playing in the final qualifying for the Open.  Speaking after his round, Sugure was his typical laid back self.  “Everything went fairly well” he replied when asked how he played.  “I hit 18 greens and I’d say I had 28 putts.  I actually missed a few putts, there was one eight foot putt on 17 that I missed.  The fairways were pretty fast but it wasn’t playing too short.  After last week in Aberdeen, the weekend in Cork Golf Club and Monday in Co Louth, James headed for Rossapenna today for the Irish Open qualifier which takes place on Saturday and Sunday.  Six places in the Dubai Duty Free Irish Open are up for grabs in the qualifier.  Sugrue along with Peter O’Keeffe were selected as two of the six GUI invitees.  Cian McNamara, Davey Barry and Daniel Crowley are among the local PGA professionals competing in the event.